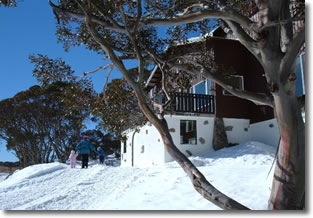 Being located about one hours travel from the nearest ski resorts, these three lodges also offered the possibility of skiing holidays of several days / weeks duration, as well as overnight shelter for touring groups. All three had large stocks of basic foodstuffs for use by Winter residents. This food was carried in by the members of that lodge each Summer. The presence of this food in each lodge significantly reduced the weight of food in the rucksacks of intending residents skiing to these lodges in Winter. The long-life food that was available sixty years ago lacked the variety of what is currently taken on overnight trips by bushwalkers and ski tourers. Thanks to Frank Leyden's ski diaries, we have the list of the food that was stored in the Lake Albina Lodge in 1953. This list is reproduced at the end of this Appendix.

Unfortunately Kunama was destroyed by avalanche in 1956 and Albina was compulsorily acquired by the Park Authorities in 1969 and later demolished. Ski touring from the huts at Whites River, Alpine and Lake Albina is described in some detail in the Second and Fifth Installments and the Appendix to the Fifth Installment of this Australian Ski Heritage Series. Will Semler and Leon Smith described some of their ski touring experiences at the Lake Albina and Alpine Huts in the Appendix to the Seventh Installment.