Part 8.1 - The Alps at the Crossroads and the AAC beyond1962 - AAC VICTORIAN MASTERPLAN &amp; PATSCHERKOFEL

The aim was to establish AAC lodges in the three main Victorian Ski Resorts – Falls Creek, Hotham and Buller. After the Falls Creek Huette was opened in 1963, Charles was very keen that the next Victorian AAC lodge should be built at Hotham, because of its ski touring potential, particularly in the direction of Mount Feathertop (via the Razorback Spur) and the Bogong High Plains (via the Loch Spur). He wanted to position the AAC lodge on the Alpine Road in between these two spurs, as shown in his 1963 sketch map reproduced as Photo No. 26. 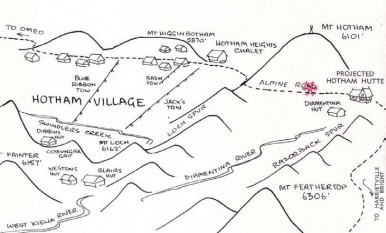 Charles Anton was keen to build the next AAC lodge at the Diamentina on Mt. Hotham, but his Victorian colleagues were concerned that a lodge at that site would be remote from the most likely sites for the inevitable future Hotham ski village and therefore unable to readily connect to future village services, such as water and electric power. They decided to first launch an AAC project at Mount Buller. The first Committee consisted of Peter de Crespigny, Warren Peck, Geoff Henke, Malcolm McColl and Eric Burt. During Autumn 1964, they issued invitations (Photo Nos. 27 & 28) to well known Buller skiers, some of whom also skied in other resorts and hence would particularly value the AAC's reciprocity between its various lodges.

The project's name was chosen because the thoughts of skiers from around the world were fixed on Patscherkofel Mountain near Innsbruck, Austria, where the 1964 Winter Olympics were about to be held. Eric Burt, then a skiers' representative on the Mt. Buller Committee of Management, facilitated the transfer to the AAC of Patscherkofel's present site on the corner of The Avenue and Breathtaker Road. From a skiing viewpoint, it is one of the best positions on Mt. Buller, being approximately 100 metres from the south-facing runs in the Bull Run area, whilst the more sheltered runs near the Bourke Street Run are only a gentle downhill run of about 200 metres. An AAC advertisement was also placed in the January 1964 Catalogue for the J. Molony Ski Shop and this advert is presented as Photo No. 29.

When the artist's impression of the proposed lodge was drawn at the end of 1963 (Photo No. 29), the Patscherkofel Committee had not finalized the lease of the lodge site nor had engaged an architect. Hence the proposed lodge is shown as a single storey building on a flat site. The building, as sketched, could have been constructed quite cheaply in 1964 using pre-fabricated standard modules, then available from a factory in the Melbourne suburbs. However, once key design issues were considered, such as the potentially heavy snow-loading on the roof, the likely excessive heat loss through the walls and the need to have airlocks for all doors that accessed the snow, the Committee decided to engage Malcolm McColl, a very experienced Melbourne snow architect, with over 20 years experience of designing snow buildings, including the Cleve Cole Memorial Hut near the top of Mt. Bogong.

Whilst Patscherkofel Lodge was being built, Leon Smith, Chairman of the AAC's Lake Albina Ski Lodge Ltd., received a letter dated 23 December 1965 from the Kosciuszko State Park Trust, announcing the Trust's intention to resume the club's Lake Albina Ski Lodge. Charles Anton said, in a note to Warren Peck dated 29 December, "Trouble seems never to cease. However, this one we will have to fight tooth and nail". Many meetings were held and many submissions were made stating the strong reasons (in the interest of the skiing public) for Albina's continued existence. After lengthy negotiations, the lodge was very reluctantly handed over to the Trust in November, 1969.

Meanwhile, construction of Patscherkofel continued and the committee's thoughts turned to the official opening in May 1966. Charles Anton was invited to open Patscherkofel, but Charles tried to get various celebreties to open the lodge, such as Prime Minister Harold Holt, because Charles felt the publicity would assist the sale of Patscherkofel memberships. A copy of Harold Holt's letter of reply to Charles' invitation is presented in Photo No. 30, onto which Charles had typed a letter to Warren Peck, advising his travel details to Melbourne and mentioning that his wife, Yutta might not be able to attend, because of her need to look after their younger child. The Prime Minister's letterhead has not copied very well onto Photo No. 30, due to fading over the past 47 years, but the Commonwealth of Australia Coat of Arms and the words "Prime Minister, Canberra" had actually been etched by the copying process into the paper that Charles sent to Warren.

In his third paragraph, Harold Holt states he has studied Charles' submission on the proposed master plan for Kosciusko (under which the AAC's Lake Albina Lodge would be compulsorily acquired by the Trust). In the fourth paragraph Harold says "I am afraid it is impossible for Zara and myself to be with you for the opening of Patscherkofel Huette at Mount Buller . . . .". Harold has written at the bottom of his letter "Kind regards from Zara and myself to Yutta and yourself, Harold".

When construction commenced, the only access to the lodge was from Breathtaker Road on the high side of the building. Hence the main entry to the lodge was designed to be from the high side. During the final stages of lodge construction, the Mt. Buller Committee of Management built an entirely new road (The Avenue) right past the Patscherkofel Lodge's back door! Last minute lodge design change needed!

The Official Opening of Patscherkofel Lodge was held on Saturday 28th May, 1966, at 8.00 pm. Some photos of this event are contained in the Second Installment of this Ski Heritage Series. Charles and his young son, Phillip, arrived at Mt. Buller immaculately attired in Lederhosen, embroided weskits and feathery Tyrolean hats. Charles was enthusiastically pushing that evening, for detailed planning to build an AAC Mt. Hotham Lodge to begin at once.

None of those present for the Patscherkofel Official Opening, would have guessed that this would be Charles' last official duty as President of the AAC.

Patscherkofel was originally built as a two-storey building with a store-room and drying room in the basement. The first floor had a foyer, lounge, dining room and kitchen with an ample supply of the latest fittings. On the same floor was a bar-den ("Peter's Pit") and, in the Accommodation Wing, seven bedrooms and two large bathrooms. The upper floor had another seven bedrooms and two bathrooms. The lodge uses a combination of electricity and gas for cooking, lighting and refrigeration, so that it can still function in the event of failure of one of these two services.

Entry into the building from The Avenue was improved in 1970 by adding a new entrance and a manager's flat (Photo 31). After a further 16 years of trouble-free operation, a very extensive rebuild was undertaken over the 1987-88 Summer. The significantly upgraded and enlarged lodge was officially opened in June 1988 by Dr. Noel Carter, the then AAC President. It is sad to note that Noel subsequently died later in that year after a long illness.

The team of Peter de Crespigny and Warren Peck, that had lead the Falls Creek Huette Committee in the early sixties, also lead the AAC team developing the Patscherkofel Lodge project at Mount Buller in the mid-sixties and went on to lead the AAC's Anton Huette Project at Mount Hotham in the early seventies. Both Peter and Warren subsequently each served a two-year term as President of the AAC, presumably as recognition of their pioneering work in establishing the AAC's first three lodges in Victoria. 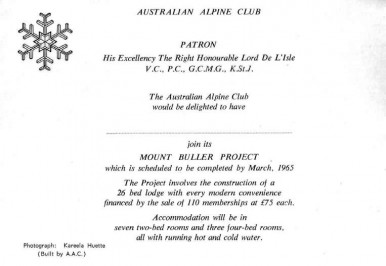