The AAC's 1962 decision to build a lodge in the Perisher Valley was influenced by the valley's significant advantages, such as the relatively high altitude of its ski runs, and the need to find a new home for the 90 members of AAC's Kareela Lodge, whose lodge had been sold to the Lend Lease Corporation at the end of the 1962 Ski Season. The concept for Perisher was presented in a brochure prepared to attract Perisher Skiers to join the AAC as Perisher Huette life foundation members, for a fee of £50 ($100). Part of that brochure, showing the proposed lodges location, is presented as Photo No. 5.

Following the successful "Lodge Launching Gluehwein Party" (in aid of the NSW Spastic Centre) at the Angus Steak Cave, Sydney, on December 7, 1962, the lease for the Huette's site was acquired on February 1, 1963. Work on the plans had commenced in October 1962 with the aim of having a small manager's flat plus 12 double bunkrooms for members and their guests, each room with an independent ensuite containing shower, handbasin and toilet. It was the first AAC Lodge to have the luxury of individual bathrooms and toilets for each bedroom and quite possibly was the first club lodge in the Perisher Valley to have such facilities. In addition to Charles Anton, the other committee members were Brian Robinson (Chairman), Alfred Morgan and Lindsay Allsop. Charles negotiated a very low price with the selected builder.

Work commenced on the foundations on February 19, 1963 and fortunately, the snow came late in that year. The Huette opened for business on the Queen's Birthday Holiday weekend in June, with Dawn Vozab as the first manageress. The Vozab family moved into the manager's flat from Warrugang Lodge next door, which they had previously managed. Despite its location in amongst the trees, a blast of cold air surged upstairs into most parts of the building, every time the front door was opened (Photo Nos.6 & 7). There was not an effective airlock inside the front door. Following the severe blizzards and very heavy snowfalls of 1964, the lodge entrance was extensively altered and Lou Vozab was asked to open up a large area beneath the bedroom wing, as a playroom for children and an area for member's lockers. Draughts still seemed to be able to enter the lodge through any slight gaps where the vertical timber boards abutted each other. Whenever the lodge was jolted by a wind gust, the carpet would rise up from the floor. More vertical boards were placed over the existing boards each Summer, so as to better seal the walls.

A gap in the external timber cladding is clearly visible in Photo No.6. It is above the windows to the left of the door that provides access onto the balcony. The underlying white insulating building paper is visible between the edges of two abutting weatherboards. Photo No. 8 shows work in progress in 1965 to provide a more sheltered front entrance to the Huette. The external cladding problems for Perisher Huette were not finally fixed until Leon Smith removed the entire external cladding in 1989, installed marine plywood across the exterior of the lodge's timber frame to provide a durable, new water-proof and draught-free seal, and then replaced the external cladding, using unwarped, treated vertical boards over the outside of the marine plywood.

When David Hayes was elected Chairman of Perisher Huette in 1968, his Committee consisted of Mrs Gertie Koenig, Ian Rae, Martin McCurrich and Simon Wright, and this team remained together during four years of constant repair and improvement. Most noteworthy, was the major addition to the rear of the building to double the size of both the kitchen and the manager's flat.

"The Perisher Huette Committee produced The Ski Tourers' Handbook for the AAC in 1970, during which year it also staged (with great success) the AAC Winter Race Meeting . . . ."

"The history of Perisher Huette, like that of so many other early AAC projects, began in great tribulation and at first seemed destined to be a history of misfortune. However Brian Robinson, Leon Smith, Dr John Edye, George Reeves, the Morgans, Gordon McDermott, David Hayes and a long list of capable workers have turned it, instead, into a record of success." (Twenty-one Years of the Australian Alpine Club, edited by Wendy Cross, published by the AAC in 1972) 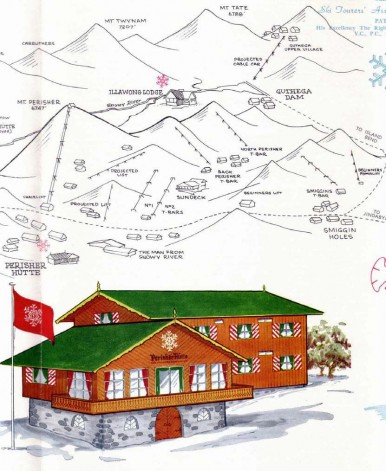