Charles used the same formula to promote this new project as he had used late in 1962 to promote the new Perisher Huette. This was a "Lodge Launching Gluehwein Party" and the production of attractive 8 page (folded) colour brochures describing the aims and objectives of the AAC in both the NSW and Victorian Alps. These brochures detailed the benefits of joining the proposed new AAC lodges at Falls Creek and Perisher Valley (Photo No. 2). The brochures were widely distributed using the AAC mailing list which, at the time, had listed very few Victorian skiers.

The brochures promoting the AAC and the two new lodge projects, had to be mailed to many more potential Falls Creek members. For this purpose, Geoff Henke and Warren Peck met (for the first time) at Geoff's home in early February, where they were joined by Jennie Ham, to mail out these new AAC brochures to keen skiers whose mailing addresses were known to either Geoff or Jennie. Personalised notes for each intended recipient were written on each person's invitation to the April 5, 1963, Lodge Launching Gluehwein Party, and inserted in each envelope with each brochure. The result was a packed venue for the gluehwein party, but only twenty memberships were sold!

Geoff Henke suggested that Warren, who had been nominated as Chairman by Charles, should approach Peter de Crespigny (a very keen Falls Creek skier) to join the committee of the Falls Creek Huette. Fortunately, Peter did join and made very substantial contributions to the success of the AAC in Victoria through recruiting his many skier contacts to the new AAC project. Not only was he heavily involved in establishing the Falls Creek Huette, but he also became the key member of the Foundation Committees of Patscherkofel Lodge and Anton Huette. Peter was also AAC President from 1970 to 1972.

"The Lodge Launching Gluehwein Party to celebrate the inauguration of the AAC's first building project in Victoria, was held at the Little Reata, Melbourne, on Friday, April 5, 1963, with proceeds in aid of the Spastic Children's Society. Highlights included "Stimmings Musik" by a harp and zither combo, the Lodge Launching Ceremony performed by Sir Wilfred Kent Hughes, and an "Alpine Fur Fashion Parade" which included what Charles considered the ultimate in furs – a fur bikini modeled by Jennie Ham." (Twenty-one Years of the Australian Alpine Club, edited by Wendy Cross, published by the AAC in 1972).

With only 20 paid-up members and £1,000 in the Huette's bank account, it was necessary to arrange finance from the AAC, from Charles personally, and from the Bank of NSW (guaranteed by Lindsay Allsop). Construction commenced on the foundations of the Falls Creek Huette on March 19, 1963 and the first snow for 1963 fell on March 20. Some photos of the Huette's construction are contained in the First Installment of this AAC Ski Heritage Series. The Huette's prefabricated walls were delivered to site on the Easter Weekend and the lock-up stage was reached on Anzac Weekend, just five weeks after site work had commenced. "The Huette was ready for the scheduled Queen's Birthday Opening, despite difficulties with snow and deep mud that resulted in every sheet of plaster, every fitting and every item of furniture having to be manhandled to the lodge from the car park," by builder John Ritchie and his team, assisted by Carol and Warren Peck, Rodney Moss, Ken Long and Peter de Crespigny.

The fundamental difficulty for the committee of the Falls Creek Huette was that Victorian skiers (used to club work parties) were skeptical of new ski lodge projects where construction was yet to start on the proposed lodge, or where there was only a partly-built shell in existence. They simply were unable to believe that a club could be founded and a lodge built in just six months. Hence, only about 40 memberships had been sold by the time the lodge commenced functioning on the 1963 Queen's Birthday Weekend. But by August, 1963, a further 48 had been sold, with another 30 being sold before the end of the 1963 ski season. As a consequence of the large numbers of children enrolled as members, the members decided to limit membership to 120 and to contribute long-term loans to cover the balance of the Huette's initial construction costs. This was done to ease the likely high demand for the Huette's 14 beds during school holidays, that would have otherwise existed, had the original target of 200 members been reached.

"The Falls Creek Huette in its early years introduced several innovations to the AAC, such as annual subscriptions, project and inter-project races, weekend bookings and Sunday to Sunday weekly bookings. Its members believed in domestic autonomy of individual projects, a view which Charles Anton clearly respected because he did not interfere in any way with the Huette's operation. The AAC Constitution . . . originated from the ideas of the Falls Creek Huette's membership."

"By 1969, it had become apparent that the Huette would have to spend a considerable sum of money to improve the heating and hot water systems and the question arose as to whether it would not be better to sell out and build an entirely new lodge. Rodney Moss made an approach to the Falls Creek Tourist Area Management Committee about the possibility of obtaining a site in the new high-rise sub-division situated very close to the Tow Terminal in the Frying Pan area. With the high standing of the AAC in Falls Creek, the club's application for a site was successful – on condition that it erected a top class building. . . .Within a very short period, the original Huette had been sold to Lauriston Girls' School for $33,500. When this was done, the possibility of erecting a luxurious lodge on the new site became a reality. Work began at the end of the 1970 season, on the new 30-bed lodge. Club membership was increased from 120 to 210." (Twenty-one Years of the Australian Alpine Club, edited by Wendy Cross, published by the AAC in 1972).

The new Huette, entirely built by paid tradesmen in 1970/71, was the most luxurious of all the AAC lodges erected up until that time. It was the second AAC lodge to boast en-suite facilities (Perisher Huette was the first in 1963) with the bedroom wing well isolated from the living areas. A manager's flat was included and its first occupant was Ted Hopkins, the Falls Creek Ranger. The new lodge was opened on the Saturday before the Queen's Birthday Weekend, 1971 and Photo No. 4 shows the lodge on opening day.

Following Victoria's Black Saturday bushfire disaster in 2009, the Falls Creek Huette's fire-rating now has to be increased for safety reasons, as have those of many other ski lodges. This involves protection of the external cladding (including the windows) against ember attack and timber cladding ignition, due to the high levels of radiant heat that can be experienced during a bushfire. 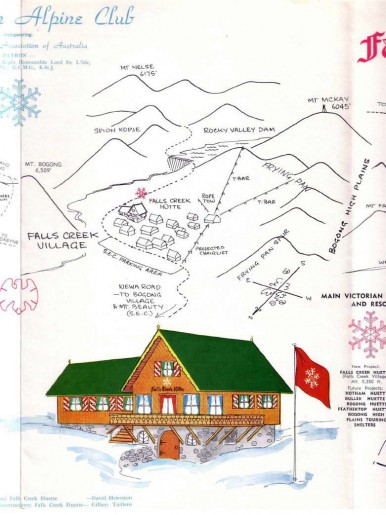