Under the heading, The Alpine Hut, Brassy Mountain, T. Southwell Keeley wrote in the 1940 Ski Year Book, "The year 1939 saw the opening up of an entirely new snow area 20 miles north of the Chalet. This was accomplished with the building of what is known as the Alpine Hut at an elevation of 5,400 ft. at the foot of the Brassy Mountain, exactly 50 miles from Cooma. It is situated in excellent snow country in the heart of the Main Range."

"The hut owes its origin to the foresight and enthusiasm of Mr. Oliver Moriarty . . . . He formed a small no-profit propriety company known as the Alpine Hut Club Pty Ltd to finance and build the hut. The company consists of fifty enthusiasts, mostly members of the Kosciusko Alpine Club . . ."

Mr Keeley described the facilities in the hut and stated it was planned to extend the hut to improve comfort and to accommodate 18 persons. The final additions were made prior to the 1946 ski season and Photo No. 9 is a sketch plan of the completed hut prepared by Frank Leyden. Two-tiered bunks (shown in Photo No. 9 with a "2") were used wherever possible to avoid cluttering up the bedrooms with too many beds at floor level. The "Ladies Bedroom" had two single beds. The "Big Bedroom" and the bedroom at the end of the building each had a single bed in addition to their two-tiered bunks. The cook had a bed in his room beside the kitchen. The provision of food in the Alpine Hut plus a cook to prepare meals, not only increased the comfort of the occupants, but also decreased the weight of their packs on the journey into the Alpine Hut. Pack horses were available to carry skis and packs to the Brassy Gap in some years.

The advantages of the Alpine Hut's location were its proximity to Mt. Jagungal (8 km), to Gungartin (12 km) and to White's River Hut (13 km). At that time the Kosciusko Alpine Club (KAC) had fitted out the Whites River Hut so that it also provided a comfortable base for ski tourers. It was common practice for skiers to spend one week at the Alpine Hute, then another week at White's River Hut and finally a third and final week at Charlottes Pass.

Very few maps were available of the area around Alpine Hut. The map used by Frank Leyden in 1943 is presented as Photo No. 10. Frank has added many landmarks in black ink, as well as the transport arrangements. 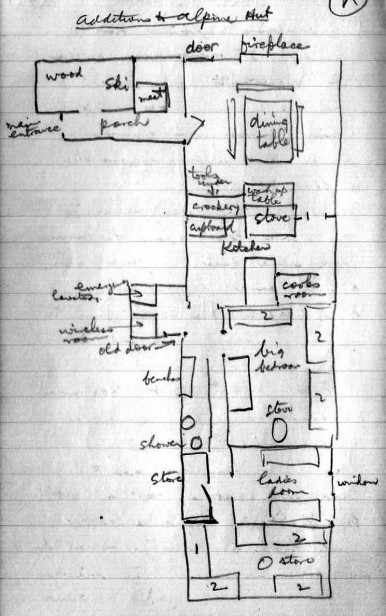 In 1950 Leon was working for an instrument maker making carburettors and after a year decided he had learned all he could and left the job at the end of July. It seemed like a good idea to have a holiday in the mountains and this was to be his first trip to the mountains without his parents, so he stayed at the Old Hotel Kosciusko, where the Southern Alps Ski Club was in residence, for 2 weeks and was booked in for a week at Alpine Hut following that.

He left the Hotel, went down to Berridale and was picked up next morning by Cec. Constance who transported skiers between Berridale and the snow line below Alpine Hut on the back of a Blitz Wagon.

They picked up several people from Cooma Railway Station, young men belonging to the Palm Beach Surf Club, most of whom had never skied before and then headed out to Alpine Hut. When they got to the point where the blitz couldn't go any further they were dropped off and they walked and skied in to the hut, arriving late in the afternoon.

Amenities at the hut were very basic. No electric light, no hot water. The outside dunny was a small shed over a pit. Whilst some radio communication with White's River Hut and the Chalet, had been possible during Frank Leyden's visits in the period 1942 to 1946 (his sketched floor plan shows a wireless room), there was no two-way wireless equipment operating in 1950.

According to local folk lore, each year the shed was dragged sideways over a new pit, thus like a planet moving around the sun, the toilet was in orbit around the hut and in theory photographs could be dated by the position of the planetary toilet.

There was a manager and his girlfriend in residence, and after a time some plates of food appeared. Leon took one look and said "thanks but I'll wait till dinner". The manager said "this is dinner". He announced that he was not at all interested in the job, had only taken it because he was drunk at the time, and there was hardly any food in the hut. What was there consisted of weevil-infested oats, melon & lemon jam, black tea, dehydrated parsnips and nothing much else. Meat for the season was provided by driving a beast up to the hut and then slaughtering it, and hanging it in a shed, however the foxes had got at that and there wasn't much of it left. Leon had taken half a dozen Cherry Ripe bars with him, and rationed himself to a small portion of one of those each day.

There were 2 or 3 very good skiers in the hut, who didn't want to ski with an inexperienced 18 year old kid, and the others of course hadn't skied before, so Leon skied mostly by himself (he did have a compass and a map) and navigated his way to Mawsons and Tin Hut.

After the week was over, he got his gear together and skied down to the snow line to meet Cec. Constance. After waiting for several hours, he realised that Cec. wasn't going to turn up, so he skied back to Alpine Hut. Everyone else had been booked in for 2 weeks, and perhaps Cec. thought Leon had also been booked for a two week vacation.

So Leon survived on the Cherry Ripes, oats etc. for another week. At no time was any more food delivered to the hut. When asked, weren't your parents worried when you didn't turn up after the week at Alpine was over? Apparently not. Of course there was no way to get a message out to anyone.There was a significant decline in ski touring in this area in the 1950's and 1960's. Bob Ward wound up the company in 1968 and a Scout Group took up the caretaker role for the Kosciuszko Huts Association (KHA) in the early 1970's, replacing or re-glazing doors and windows. It is sad to relate that this hut, specifically built for ski touring and favourably regarded by many skiers, including Don Richardson, Elyne Mitchell and Alan Andrews, "burnt down unexpectedly in 1979" (KHA Profile dated 21 January 2006).