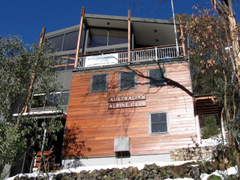 It was time to explore that possibility. There was supposed to be a hut there although we could not find out too much about it. Mr Mattingley (ex Swinburne College) and I organised a party. It turned out to be the two of us and 7 girls. Ansett, which was then a little airline and had not yet taken over ANA, flew to Launceston. We simply took the skis into the DC2 and dumped them in the space between the seats, presumably to train us for mountain climbing in case we had to go to the toilet. A bus to the bottom of the mount and then we traipsed up. Near the top Mr Mattingley confided that he had to have an appendix operation and that he could not stay and he returned. That operation was never heard of again so I suppose the 7 girls must have been too much. The bunks were around the walls and there was a kind of stove in the middle. The weather was good, the slopes rather mild, presumably Ben Lomond might have been better off it if it had grown taller. We cadged a lift on the way back which included an offer of delicious kangaroo tail soup.

Close to Hobart with a forestry hut including a little stove was near Lake Dobson. From then on you had to trudge quite a distance to the better slopes. Skiing started to become fairly popular.

All this is less about skiing than the stories around it, but that is how it was just after the end of the Second World War.

The following account of Leon Smith's 1950 ski holiday, highlights the problems that could arise whilst spending a week in the Alpine Hut, a commercial ski-touring lodge completely lacking any means of communication with the outside world. Frank Leyden's experiences at Alpine Hut during the period 1942 to 1946, were described in the Second Installment of this Ski Heritage Series. We first provide additional information about the Alpine Hut followed by the account of Leon Smith's 1950 fortnight there (he was only booked to stay for one week, but circumstances beyond his control, compelled him to stay for two weeks).